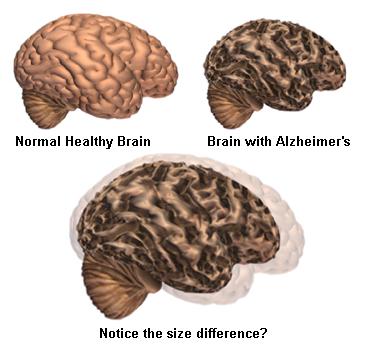 How a healthy brain compares to one with Alzheimer's. A new study shows a link between obesity and the brain disease.

As if there was not enough bad news for the obesity prone, a new study has shown a link between obesity and Alzheimer's disease.

News agency Reuters reports that the study found that a variant of an obesity gene carried by more than a third of the U.S. population also reduces brain volume, raising the carriers' risk of Alzheimer's.
"The basic result is that this very prevalent gene not only adds an inch to your waistline, but makes your brain look 16 years older," said Paul Thompson, a professor of neurology at the University of California Los Angeles, who worked on the study published in Proceedings of the National Academy of Sciences.
His advice? "In all the maelstrom of activities you do, exercise and a low-fat diet are genuinely saving your brain from both stroke and Alzheimer's."